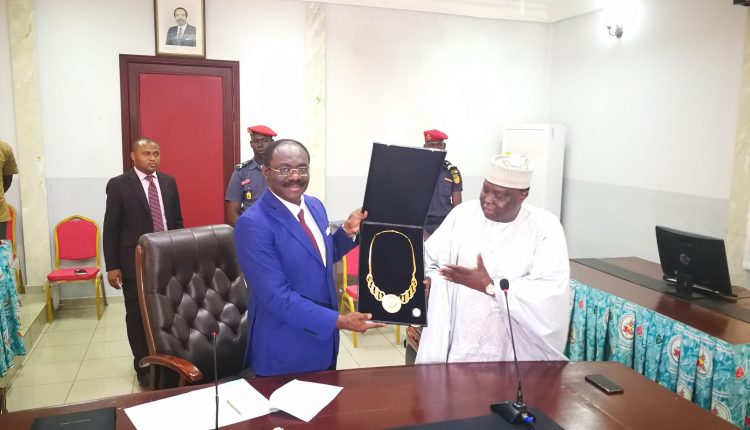 The President of the Cameroon National Olympic and Sports Committee (CNOSC) presented his award received in Qatar last October.

Awarded The ANOC Order of Merit Award last October 17, in Qatar, Kalkaba Malboum and a delegation from the Cameroon National Olympic and Sports Committee (CNOSC), were received in audience by the Minister of Sports and Physical Education Pr Narcisse Mouelle Kombi last Wednesday.

Decorated for his contributions in the milieu of sports in the local and intertinal levels, Kalkaba Malboum came to present his award to the Sports boss. Pr Narcisse Mouelle Kombi expressed the desire that the state is supposed to acknowledge sportsmen of the pedigree Kalkaba Malboum.

He acclaimed (CNOSC) president for his wide experience in the domain of international sports administration and the fact that Kalkaba Malboum has been one Cameroon’s major political key actor at the national, continental and international level for several years.

Minsep on behalf of the government congratulated the Kalkaba Malboum for his award and urged him continue making the Cameroonian flag fly high in the international when they are talking of sports administration.

Kalkaba Malboum in response said he was elated with the way his recognition was appreciated by Cameroon and the sports family at large.

He expressed gratitude to the Head of State for relentless efforts to make sure sports is at the recognised at the international scene. The former second vice-president of the International Athletics Association Federation (IAAF) highlighted the fact that the Olympic movement has as one of its aims the promotion of peace. Kalkaba Malboum dedicated his award for the return of peace in Cameroon.